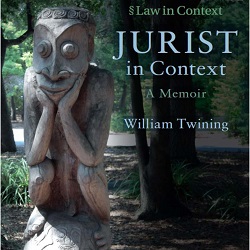 William Twining discusses his intellectual memoir, Jurist in Context (Cambridge University Press, 2019), in conversation with David Sugarman. Jurist in Context tells the story of the development of William’s thought and writings in the context of Africa, the UK and the USA. It addresses in an open and self-critical fashion, topics which have been central to William’s life and research: the complexities of decolonisation, the troubles in Belfast, the contextual turn in legal studies, rethinking evidence and the implications of globalisation. It advances a particular conception of Jurisprudence that can contribute to the academic discipline of Law in several important ways. It also offers a window on legal academic praxis in the late twentieth and early twenty-first centuries by one of the most influential figures in British legal education over the last sixty years. There will be time for questions from, and discussion with, the audience. The event will be followed by an informal reception.

William Twining FBA, Hon. QC. and Quain Professor of Jurisprudence Emeritus at UCL, is well-known internationally as a distinctive voice in Jurisprudence and academic law, as a leader of the Law in Context Movement, and for influential contributions to Legal Education, Evidence, and Globalisation and Law. See, further, https://www.ucl.ac.uk/laws/people/prof-william-twining

David Sugarman F.R.Hist.S., Professor of Law Emeritus at Lancaster University and Senior Associate Research Fellow at IALS, is well known internationally for his writing on law-in-history and legal education, and his interviews with leading jurists. See, further, http://www.lancs.ac.uk/fass/law/profiles/David-Sugarman

This event is free but advance booking is required.