THE DIRECTOR’S SEMINAR SERIES: Goblin Market and the World of Contract 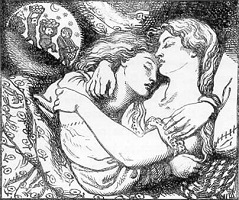 Goblin Market is a narrative poem by Christina Rossetti of some 570 lines published by Macmillan in 1862 as part of Rossetti’s first public collection of her work. The poem explores the twilight adventures over a period of months of two sisters, Laura and Lizzie, and their friend, Jeanie, at a fruit market run by ‘Goblin’ men. (There is no need for any prospective attendee to read the poem in advance; I will tell its story in the course of my paper).

Notwithstanding Rossetti’s own assertion that Goblin Market was nothing more than a children’s story, critics have offered a range of allegorical interpretations of it ranging from, inter alia, a story about fallen women, a Tractarian soliloquy, an ode to sisterly love and a tale of the Feminine Christ. Whatever interpretative frame we put around Goblin Market the denouement of its story is the redemptive action that Lizzie takes to save her sister, Laura, through her brave encounter with the Goblins where she tries unsuccessfully to buy their fruit.

Goblin Market has never been considered as a contract text. However it offers us the opportunity to compare and contrast a number of contractual settings some of which come within the bounds of contract law, others of which sit squarely outside this but within the life world of human experience. In this paper I identify and explore four distinctive transactions with different phases and degrees of completeness. They are, in broad terms, the status contract of marriage and the consequences that flow from that, the (un)enforceable prostitution contract, the contract for the purchase of goods and the relational social contract of obligation between sisters. All of these are influenced by the subtext of what it means for women to operate in the market place as subject or object.

Professor Sally Wheeler, OBE MRIA FAcSS FAAL is the Deputy Vice-Chancellor for International Strategy and Dean of ANU College of Law. Prior to taking up these positions at ANU, Sally was a Professor and Pro Vice-Chancellor for Research and Enterprise at Queen's University Belfast.

Sally was elected to the Academy of Social Sciences and the Royal Irish Academy in 2011 and 2013, respectively. She became a Fellow of the Australian Academy of Law in 2018. Sally was the Head of the School of Law at Queen's University Belfast for several years where she also served as Interim Dean of the Faculty of Arts Humanities and Social Sciences (AHSS), Dean of Internationalisation (AHSS) and, in 2017, Pro-Vice Chancellor for Research and Enterprise. In the 2017 New Year Honours list, Sally was awarded an OBE for services to higher education in Northern Ireland.

This Webinar is free but advance booking is required. Details about how to join the virtual event will be circulated via email to registered attendees the day before the event.